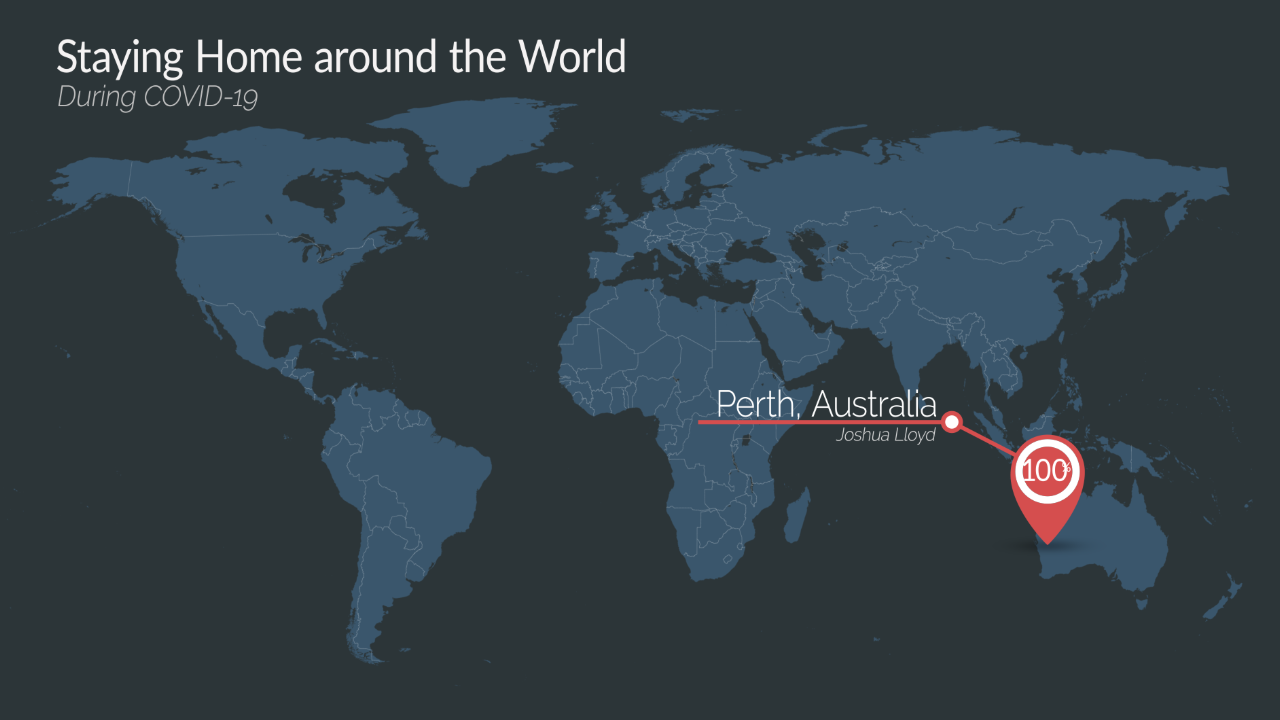 You were travelling through Asia last year and came back on the first of February this year. By the time you left Asia the Coronavirus had spread through the continent. Dodging the virus in Asia, you returned to Australia. At that time, Australia was already handling a huge crisis: the bushfires. What was it like to come back?

“It was very weird. I left Vietnam and had a layover in Singapore. I had to go through four infrared scanners while going through the airport from one plane to another. That was the first thing I noticed from the pandemic. When I came back to Australia it was like Corona didn’t even exist. It was so new and so early. We just had the bushfires, like you said, which thankfully for me didn’t affect me at all because it was mainly over east. Which was good for me, I didn’t have any family to be worried about. The government was very quick to give the people who got affected the help that they needed. To rebuild houses, for example.”

The bushfires and the pandemic overlapped. How are the Australian people handling that?

“Uhm… we’re handling it quite well. Unfortunately, as soon as the virus came and the bushfires started to come to an end, all the news was only about the Coronavirus. So, the aftermath of the bushfires hasn’t really been talked about. This is, for as far as I can remember, the sixth big fire in Australia. So, it’s not that uncommon. Australians are so used to bushfires and know that it sucks but also that we will get through it. But a lot of people lost properties because of the floods that came after the fires. Most of them were in regional towns and the majority of the Corona cases in the cities. So, I think the people affected by the bushfires weren’t that exposed to the risk of Corona. I am not sure though because the news is flooded with Corona and not the aftermath of the fires. We didn’t really get a break between the two of them.”

What are the regulations now and how do you see that life has changed?

“All cafés and restaurants are closed except for takeaway. The leisure facilities are shut. We, Australians, are used to going around, going to the beach or out on the boats but then they shut down the beaches. All playgrounds have been taped off too. In this way, they made it clear no one should leave their house for nonessential reasons. Streets are empty, and that is just abnormal. It’s just three times as quiet as usual. The main thing is just the social distancing, but the hardest thing is that the footy has been cancelled. It sucks haha. It’s our national sport.”

Is that the biggest problem for the Australian people?

“Well, it is a big one for sure! It is the national sport, everyone watches it. This is the time when it gets played through, it’s winter. They have played one round of footy before it all got cancelled. The teams are struggling financially because they go from year to year revenues from the games. Because of that, all the AFL (Australian Football League) teams are stressing a little bit.”

Do you think they will financially get through this?

“Yeah, they will get through it but it is definitely the biggest problem the AFL-fellows have ever seen. I heard on the news that the number of club memberships has risen. I think people realized that when the teams don’t play, there is a chance that a lot of them will not be able to participate in next season’s league. As a result, people bought memberships to support them. With that increase of memberships, I think they will survive and come back next season.”

What are Australia’s biggest challenge and advantage regarding the virus?

“I would say the biggest challenge is definitely practising and keeping that social distance. That’s Australia’s biggest task and focus right now. A majority of the Corona cases in Australia have been transferred by people on cruise ships. Right now, all around the country there are cruise ships at ports in lockdown state and cannot leave. We are trying to help them while maintaining the social distancing regulations.

The greatest advantage that we have is the large spaces between houses and living areas in general, for sure. With this much space between people, it definitely makes things easier. I can walk down the street and be at least five meters away from people already, without actively practising social distancing. It is definitely easier to keep social distance here than in other places in the world, I’d say.”

From what you see, are the Australian people following the restrictions and measurements strictly or not?

“I think for the most part people are following them. But over the Easter weekend, people did not seem to give a shit. They went out on the boats and caught up with friends and family. Though, for the most part, people are doing their best to keep the social distance. And as always, you’ll keep a few bad eggs.”

For you, the virus presented not only difficulties but also an opportunity. Supermarkets were hiring more staff which lead to you getting a job after travelling. What is it like working in a supermarket while there’s an infectious virus spreading through the country?

“It’s very double. Financially, it’s been better for me since I’m working and have an income. Also, it helps me mentally because I keep busy. But the situation is really bad and that is very visible. Also, I sometimes get a bit worried. Going to work and knowing that the chances of me getting in contact with people with Corona are so much higher than for the people I live with. Such as my dad and my brother. They work in the mines and interact with way fewer people. The chances of me getting Corona and potentially giving it to the rest of my family concerns me. That is probably the hardest part. Knowing I am at risk and I am putting other people at risk because of it.”

Are you able to do your work properly with the social distance regulations?

“Honestly, it’s hard. We try to get customers to keep that 1,5 meters distance. Trying to force that is really not easy at all. People do not care and do not listen. Also, to some of them, grocery shopping has become a popular excuse to go outside, even if it is just for one product. Whenever I see them I just think ‘Go home, please’. I see the exact same people coming in one day and they buy one package of chips and then the next day they come back and buy another package of chips. Just one. I mean, common! Just buy groceries for the whole week and only come back if you forgot something. But no, people just seem to use it as an excuse to get out of the house. It is just not cool.

For the rest, we have a limit of a hundred customers in the store at once, which helps. Aside from that, the hygiene measures got way stricter. Every trolley that has been brought in has to be sanitized fully, wiped down, even all the bars. After every customer, we wipe the transaction machines off. Basically, all the measures tripled. Everyone has so much more to do in one shift.”

What about the safety of the staff?

“Fortunately, I can move around and away from people if needed. And at the Deli counter, there is already a big distance between the staff and customers, so I am lucky. But at the checkouts it’s different. We will get the glass panels for the cashiers soon. I think they are coming next week.

If the situation gets worse in your area, would you consider quitting your job?

“I don’t think so. Thankfully, where I live it has been quite remote. There have only been two confirmed cases or so. All have been fully quarantined. The risks here are very low, because of the measures the government has been taking. But if it gets worse… I would consider it, but I don’t know if I would be able to quit.”

“Because it really keeps me going, mentally, and I need to save up some money for the future.”

“Before, I would always go and see my best friend multiple times a week. I haven’t seen her in so long now. That has been really weird for me. Going from ‘When are we going to catch up?’ to not being able to ask that. So, not seeing friends has been the hardest part. Having in-person interactions with them, I mean. Phone calls are nice but seeing them in person is so much better. I knew that already, but this situation doubled it down and reinforced the importance of seeing your friends.”

What are you planning to do after the Corona crisis?

“I want to move out. That is the main goal. Because when I came back, I moved back in with my parents. So, the next goal is to save up, move out of home and then hopefully working on getting a better career path.”

With a sneak-peek into Josh’s life, we can taste what it is like to be in Australia right now. To get a better overall view of the situation in Australia we have to look at the numbers and statistics.