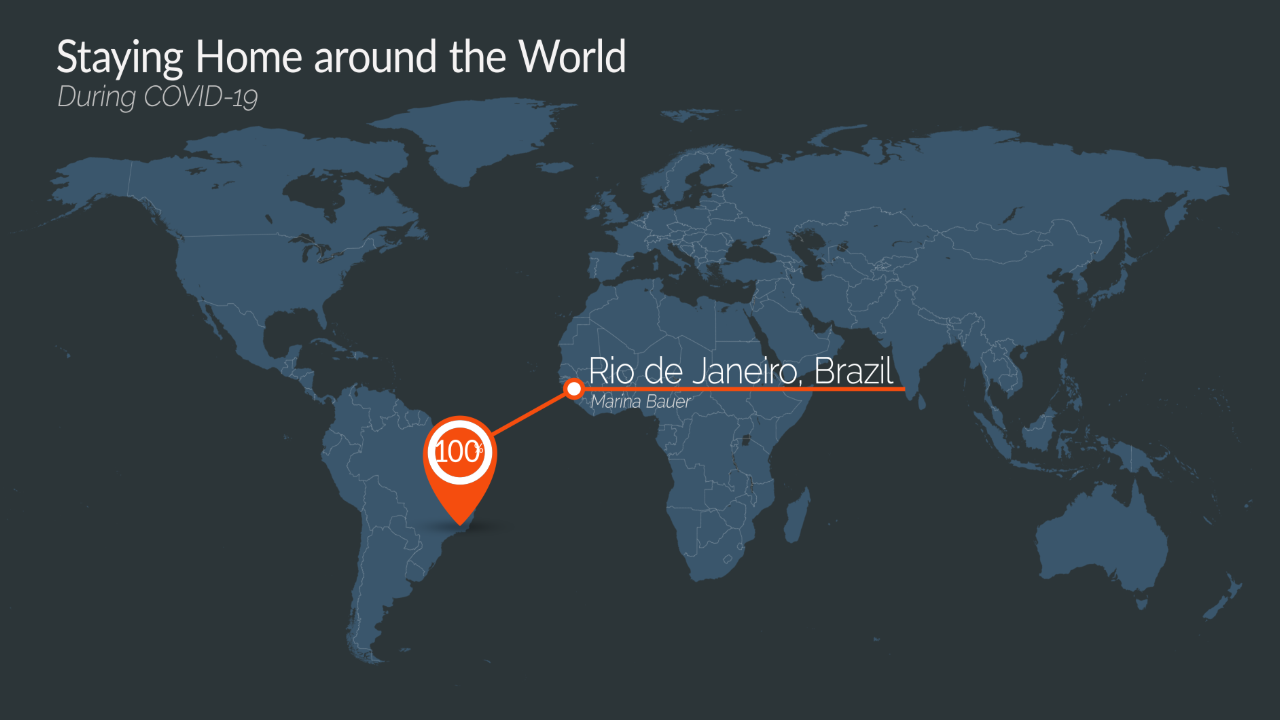 Can you explain the situation in Brazil?

“The situation changes every day. Brazil has always been a mess, full of corruption and corrupt people, but the difference now is how crazy and insane the president is. I do not think there will be an impeachment, but I hope 2022 arrives fast! We have to fight for our future as individuals. If the government helps us somehow, we have to use the help quickly because in most cases it is temporary. If there is no governmental aid, you will have to do your best on your own. That is how we currently live.”

“Multiple Health Ministers have been fired or resigned. This is because president Bolsonaro needs someone who agrees with him in the use of hydroxychloroquine (a medication used to treat malaria, lupus, and rheumatoid arthritis), is against social distancing, and is respected in the medical community. Until he finds that person, the current secretary executive of the Health Ministry, Eduardo Pazuello, is in charge of the Ministry. Pazuello is an army officer and has no experience in the health field at all. In the meantime, the president invites everyone in the government who is against his beliefs to leave.”

Take us back to when your first got notice of the virus. How did you experience this?

“I knew about the virus before I came back to Brazil. I lived in South Korea for a few years and came back to Brazil in January. When I was in Korea I read an article about a ‘mysterious pneumonia-like illness’ that is later known as COVID-19. At that point, I did not expect it to reach my country because, during the virus outbreak in 2003, we only had one case of SARS and no reported case of MERS. Because of that, I was not expecting this ‘mysterious pneumonia-like illness’ to come to Brazil.

On February 26th it was on the news that a 61-year-old man had gotten the virus. He had come back from Italy and went to the hospital the day before with breathing difficulties. This was the first confirmed case in Brazil. At that time, Health Minister Mandetta said that because it is summertime, the risk of getting infected was low compared to Europe. We are a tropical country, have a different environment, and based on our previous experiences with respiratory syndromes, such as SARS and MERS, he said we were not affected. Because of that, we did not change our routines at all and just went on with life.”

What did the government do in response?

“On March 20th we already had 283 confirmed cases. That day, the national government declared the State of Public Calamity. Nowadays, we have a lot of national- and state-based measures. Currently, I am in Rio de Janeiro with my parents. Both Rio and São Paulo declared fifteen days of lockdown on March 24th after the reported deaths of Corona in both states. All non-essential services and businesses closed, and people were strongly advised to stay at home. In general, we are following the W.H.O. (World Health Organization) measurements such as social distancing, only one family member can go out to the supermarket, parks and beaches “supposed” to be closed, no one should go.”

By the way you said supposed to be closed I assume that that is not the case?

“Yes, people are breaking the social isolation. What is happening is that the cops are there to stop people from going. In the case of Rio, we have a lot of beaches and people are used to going there often. Therefore, the presence of the cops is very visible there, but the thing is they are getting beaten up. They are getting beaten by the people who are trying to get onto the beach. Those people just do not understand why they should stay at home. The cops are trying to stop them, but we have this problem.”

Has this problem, violence against the police, occurred before the pandemic too?

“When it comes to drug dealers and favelas (a Brazilian shantytown or a shack located within or on the outskirts of large cities) it has always been like that. The cops in there were always in dangerous situations. But this is the first time this violence against the police is caused by commoners.”

You already talked a little about it, but there has been a lot of controversy surrounding the attitude of the Brazilian president. What was his response to the virus at first?

“In the beginning, he was saying that it was ‘a hysteria’. Saying that it was not a big deal, just the normal flu. This was his first response and from there it only got worse. Not too long ago, people outside of the government building in Brasilia were outside and giving support to him while he was saying ‘People are going to die anyway, that’s what happens. We have to focus on the economy’. It is ridiculous to say, ‘What can I do, people are going to die anyway’. He believes whatever he wants to believe, ignoring science, ignoring facts, ignoring everything. The people who support him, just follow.”

“Weirdly, there are people who follow him like that. Mainly the people who follow him believe in a dictatorship. As it is right now, we can have an opinion and express it. But in a dictatorship, we must not do this. We would get arrested if you expressed your opinion. Some people apparently want that. I really cannot imagine why. How can you want a dictatorship and follow someone who talks nonsense? For instance, Bolsonaro has been tested for Corona three times already, I think. He does not want to share the results because it is ‘his business’ and ‘his life’. Nobody needs to know, in his opinion.”

Generally speaking, in Brazil there is a big division between people who want everyone to go back to work (pro-Bolsonaro), and people who are concerned about the spreading of the virus (anti-Bolsonaro). How do you see this division?

“Especially, on social media and the news, I notice the division. For instance, online people who are against him are sharing the nonsense the president says and presenting the controversies. On the other side, I see people expressing their support for him. Saying things like ‘If you want to stay at home, you should put a red ribbon on your door, so everyone knows you are against the economy!’. Through the news we know who is pro- and anti-Bolsonaro. We see people on the streets, getting together to support the president, taking pictures with him, even shaking hands and wearing the masks on their chins.”

What do you think is the biggest struggle for Brazil when it comes to tackling the virus?

“I believe it is the absence of a consistent government that cares about the people. Because if you agree on a certain topic, you are right-wing. If you disagree, you are left-wing. It is very black and white and not necessarily looked at out of the best interest for the Brazilian people. Right now, we have this political war between health and economy, pro- and anti-Bolsonaro. Instead, we should be working together against the Coronavirus, but that does not seem to be a priority. To be honest, all my life I have seen governors doing what they needed to do to make their ruling period last the longest. Doing things that would be favourable to them in the political pool. They just cared about their image and status. But in the case of the first health minister, Mandetta, it was different. Bolsonaro wanted a quick fix but Mandetta started the quarantine in the early days to flatten the curve. He wanted to minimize the number of deaths to avoid the hospitals from getting overcrowded. When he got fired he was still concerned about people’s lives. His biggest concern is doctors choosing who would survive and who would die. Bolsonaro not only fired him because he did not have the same view on the situation but also because people were paying more attention to the health minister than the president. It is all about who is more popular than him in the end.”

For you personally, what has been the biggest struggle due to the virus?

“To be honest, there is no big struggle for me. I have agoraphobia (anxiety disorder in which you fear and avoid situations and places that could cause you to panic, make you feel trapped, helpless or embarrassed) and because of that, I have always kind of practised social distancing. Fortunately, my family and I have the privilege of staying at home and not having to worry about money. My biggest concern would be the health of my family. I have my sick uncle living here, who is more at risk. Also, my parents are categorized in the group of people who are ‘old’ and thus more at risk as well. I am worried about them.”

How are you getting through these days without getting bored?

“Nowadays, I am doing online courses to improve myself professionally. I am improving my work and sharing them through social media. I am a designer. In Korea, I did not have many opportunities in my field of work because over there you are seen as a foreigner before they see your qualities. They need to justify first why they would hire a foreigner over a Korean, which I think is pretty reasonable. In Brazil, I am a citizen and therefore have more opportunities here. Before, I would feel guilty because I was not doing anything productive through society’s eyes. Even though I know very well how serious this situation is, I see this time as an opportunity to organize myself. Therefore, when everything reopens I will be ready.”

“First of all, catch up with all of my medical check-ups. Then I will go to Curitiba because all of my boxes from Korea are delivered to my apartment there. I want to unpack and see if anything broke haha. Of course, I want to go to restaurants again. I miss that so much because the restaurants in Curitiba give you a special experience of the city. Going to the hair salon is also something I will definitely do because my roots are showing and need to get dyed. The hair salons are actually open right now, but I prefer to go after the pandemic.”

With this peek into Marina’s life we can see what it is like to live in Brazil right now. To get a better general view of the Coronavirus in Brazil we have to look at the numbers and statistics.