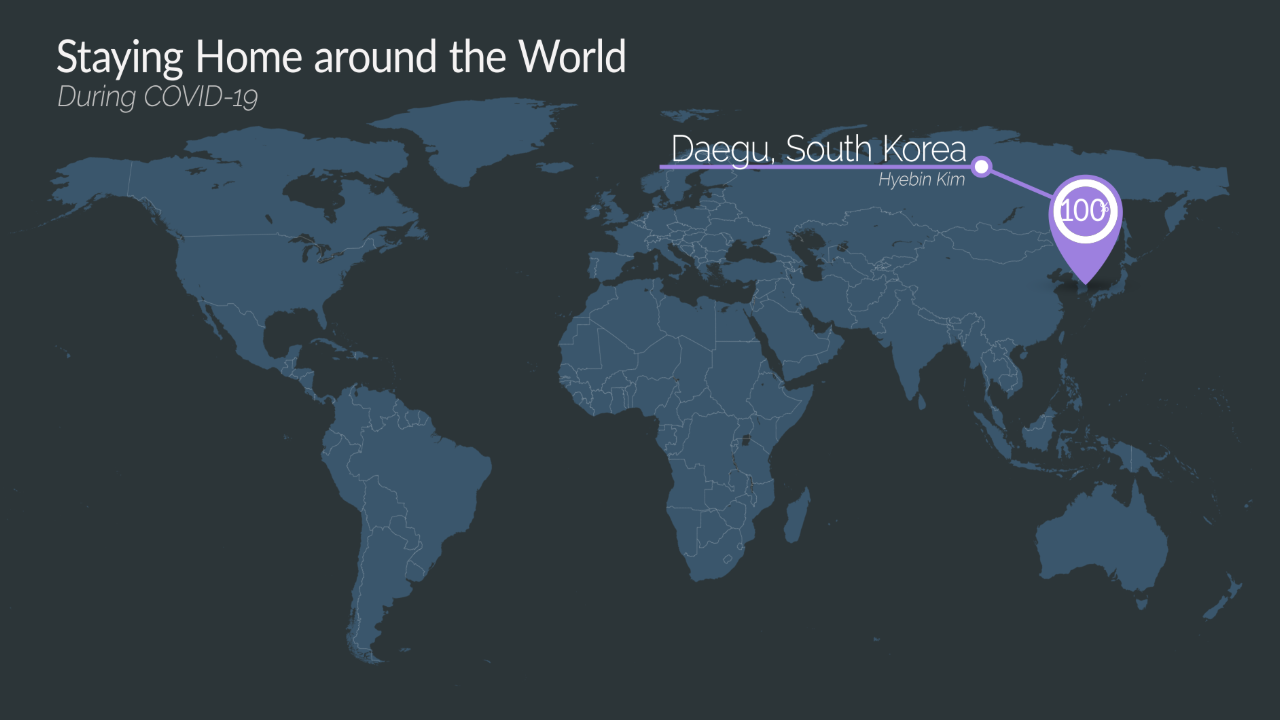 When the Coronavirus appeared in China, were you paying attention to it since it’s close to Korea?

The first cases of Corona in South Korea got confirmed on January 20th. How did you experience this?

“Actually, I barely remember this. It was months ago. I do remember people were afraid of being infected, but not as much as right now. At the time, we didn’t know anything about Corona. About how fast you can get infected, how widespread it was and that it could be deadly. There was only worry about getting infected, but not hysterically because there was not enough knowledge about the virus yet at that time.”

You live in Daegu, which was the epicentre of the outbreak in South Korea due to the incident of Patient 31. How did you get hold of this mass infection?

“`The case of patient 31 occurred because of a certain religion called Shincheonji. The 31st Corona patient infected tons of others during a church ceremony. First of all, I was very surprised that we have that many religious people. The first problem at that time was that these infected people tried to hide so that we could not follow them up. And also, to get an actual, proper treatment after that. I think that is why patient 31 spread the virus so widely. She was not cooperating in the investigation. The other patients of the Shincheonji church were not very cooperative either. They tried to hide as well and that’s how countless others got infected too.”

Why would they hide when they put public health at risk?

“Because they don’t want the religion to have a bad reputation.”

When did you notice that the outbreak in Daegu was extensive?

“I think around mid-February. There were some emergency alerts from the government and city hall to tell us to stay at home. When I turned on the TV it was all over the news. All broadcasters reported about the Corona outbreak in Daegu, the mass infection caused by patient 31. Before her, Daegu was clear. We had no patient of Corona. Nationally, the government did a great job of containing the virus. But after her, we were overflowing with Corona cases and it was difficult to control. I was taken aback by the sudden change.”

How did Daegu as a city change?

“Hospitality and small businesses closed down altogether. Most people could not go to work. My dad is a vegetable supplier for restaurants. Now, his income is almost zero because no restaurants were open. Currently, the corona cases have decreased and continue to do so. People start to go out but restaurants and cafes that had to close have a hard time to recover. Though, some restaurants are reopening, at this moment. Financially, the city changed a lot and you see that in hospitality. Usually, Daegu is a very busy, crowded city but after the breakout, the streets were completely empty. It was weird and scary. I never imagined the city this silent. It felt like a ghost town.”

What impact does this have on your family, financially? Are you managing through financial support from the government?

“The government tries to support people financially, but it is not enough. I still live with my parents and I see them struggling. My mum is a teacher and she could not go to work. Fortunately, they reopened the schools not long ago. However, for my father it’s different. From the beginning of the Corona outbreak until now he barely has any work at all. As a result, we have a big hole in our security deposit. We are very thankful for the governmental support, but it is not enough to recover our financial status.”

What measurements did the government take to tackle the virus?

“I think Korea’s measurements for countering and preventing the spreading of the virus are great. Right after the outbreak, they started to test as much as possible. The government also has a contract with mask manufacturers. Because of that, they did not have much trouble to supply the masks for the public. Also, there are drive-through testings to prevent the hospitals from overflowing and regulating the infections. We have some selective call- and health centres only for Corona. For the rest, daily emergency alerts and periodical disinfection everywhere. A good thing about the government’s strategy is that they are focusing on families with low income. They offer disinfection and masks for free to prevent mass infections.”

What would you be doing now if the virus had not broken out in Korea?

“I definitely would have had several job interviews. This is my biggest problem because all my job interviews got cancelled or delayed because of the virus. I want to become a flight attendant, but the aviation industry has been extremely damaged. I am not sure when the aviation will be fully recovered, but I do know that it’s going to take a long time.”

What kind of concerns do you have regarding the situation?

“Aside from my personal problems, I’m worried about another mass infection occurring. Because of the measurements being relaxed a bit, people are going out thinking that the virus has passed already. But it can cause us to get another mass infection. If one person gets infected and we start socializing on a large scale again, then the virus can spread rapidly once again.

Also, a few weeks ago, something happened in Gangnam. I’m really worried about Gangnam because there was… an incident. In Korea, it is illegal to ‘buy’ women. Pay for the sex, I mean. There was an incident where there was a couple of males who went to Gangnam for this purpose. There was one worker who was infected by Corona. She had a few hundred ‘customers’ and was in close contact with other sex workers. These males went there, even though the Coronavirus had reached our country and we were supposed to stay home. They got infected and spread the virus widely, but the media and government did not prevail as usual. Usually, when there is a patient search through the entire moving course of the patient. They send out a lot of emergency alerts about the case and the media will be on it. In this case, they were in silence.”

Why did no one report these cases?

But you did hear about it, somehow it got leaked.

“Yes, there is some news about it but not as much as usual.”

Korea has made headlines in international news media. First, because of having the highest rate of confirmed Corona cases in the world. Nowadays, South Korea is getting praised for its effective strategy to deal with the virus. How do Koreans view this change?

“We have experience in dealing with a mass infection from the 2002–2004 SARS outbreak. As a result, we have a quite well-structured protocol. When I heard about Corona through the news, before it came to Korea, the K.C.D.C. (Korea Centers for Disease Control and Prevention) was already preparing for the virus coming to Korea. I think they did great but Korea is politically quite divided. Our president is from the liberal party. The conservative party is using Corona against the government. They use it to maximize the concern about the virus and overshadow the positive outcome of the governmental measurements. It is very improper. They spread their concerns through the news which resulted in a lot of people being incredibly afraid. That was in the beginning very much the case. But now, we know that the government did great because we can see that we have a very low mortality rate for Corona. But before those numbers came out, people blamed the government because of the high rate of patients and deaths. Daegu is very conservative, some people close to me are too. They won’t admit the government’s success.”

What did your daily life look like before the corona outbreak in Korea?

“I would go out to cafes about four times a week because I can’t concentrate at home. At least once a week I would hang out with my friends and I went to The Box, a language exchange organization, as well. At The Box, there is an exchange of Korean and English language between locals and foreigners. I go there to improve my English more and meet new people. Before the outbreak, I also worked as an English teacher for elementary school students. But since the outbreak, I have been staying at home.”

How is fulltime staying at home with your family going for you?

“I love staying at home. I really enjoy laying on my bed and watching YouTube but being with my parents 24/7… it actually is kind of tough. My father and I fight a hundred times more than before the pandemic. Before, our daily routines were very different. So, we had fewer chances of meeting each other. But suddenly we have to stay together all the time and yeah… we discovered that we can fight over literally any topic.”

“Apply for jobs as much as I can, of course! Have the interviews, get the job and travel the world!”

Through Hyebin’s story, you get a rough idea of the situation in South Korea. However, when you look at the statistics you will learn more about the general picture of the country.