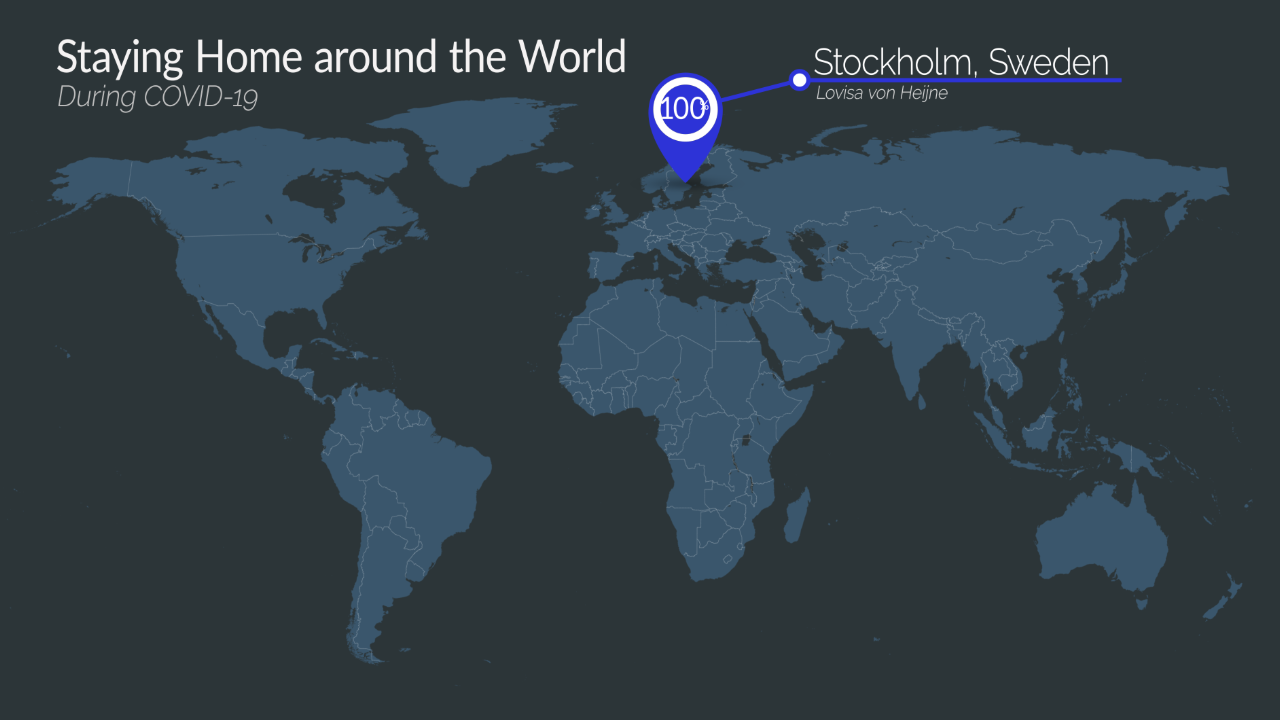 The first Corona case in Sweden was confirmed on February 15th. How did you find out about it and what went through your mind?

“Probably in an article suggested by Google because sometimes when I’m bored I scroll through those. I was not directly aware because I was in a pretty intensive elective course that took all of my time. Meanwhile, I was following up on a seasonal depression. I thought it is unsure how it is going to evolve here and in the rest of the world. When the first case was confirmed it was a week in February that we get off of school for the ‘sports holiday’. A lot of people go to the Alpes and go skiing. At that time, it felt like it was probably going to come to Sweden at some point. I was just taking everything one day at the time. I thought ‘I will deal with that when it becomes important’.

On a Thursday, March 12th the number of confirmed Corona cases suddenly doubled in a day. I remember my mum reacted strongly. She called me and told me to be careful. It was not just her, many reacted that way. We ended up cancelling my class the next day. Then early next week, we had a time-out, social distance, it happened so quickly. The cases started to go up faster and faster.”

What did you do when the number of cases started to increase faster?

“I lived in an apartment in Stockholm with my sister. Classes got cancelled, and we did not really know what was going to happen. My sister had decided to go home to our parents, who live just outside of the capital city. Two days later, I got sick of just being alone in our apartment, so I decided to go as well. We left, not really knowing when we would be going back. Right now, we feel like we made the right decision to be with our family and the dog in a home with a garden and fewer people in the area. But at the time, it was very uncertain.”

Was that when you realized that this virus was having a huge impact?

“Kind of. At the time, I was doing a group project with a lot of international students. They suddenly moved home quickly. Really quickly. The U.S. closed off all travels from Europe and we had a few Americans in our class. They bought their tickets home and were gone the same day. That was a big shock. It was the first time that I reacted strongly to it because that was such a strong signal.”

How did the Swedish government respond?

“If I remember correctly, in the first week there was only news about risk groups. The first people that were strongly recommended to stay at home are the people over seventy and people with chronic deceases. I do not know if it was the media or government, probably both.

Sweden is not taking strict measurements like other countries. Why do you think this is the case?

“The thing about Sweden is that the government relies on public agencies and institutions that have expert knowledge. Therefore, the public health agency has really been the driving force behind the decisions and the recommendations in place. For example, in Denmark, the national government has a completely different control over society. They do not have the same institutions as Sweden. Here, the national government cannot legally close down schools. That was amended due to the pandemic, but they still have not closed schools because of the recommendations of the public health agency. Some things are still confusing, to be honest. To me, it still is not fully clear what is actually possible for our government to close down and what not compared to other countries.”

Why is it that the government cannot close down schools? Do they not have the authority to do that?

“They did not, but now they have the authority because they pushed through that change in the law surprisingly quickly. What followed was a discussion in the media about how much governmental control will increase after the pandemic. This whole ordeal will probably resolve in that the government can make decisions that it has not been able to before. I think for Sweden that is a big change.

Closing everything down in a country, like in Vietnam for example, is not legally possible for the Swedish government. This is something that has not been discussed in global media when they covered Sweden. Governments around the world have different authorities and different recognitions with the people or are institutionalized in different ways. Sweden has a very extensive government, but it is also quite slimmed down. We have these institutions that are more like little spread out islands. Together they are very influential, and they are really everywhere in society. Which I think makes people trust them more because it isn’t an anonymous, single state.”

How does it work in Sweden then?

“For example, if an agency puts out a recommendation, then it is a regulation. Though, in fact, it is not a regulation because an agency does not have the authority to push through a lot. That’s the government. It is like you have to follow these recommendations as if they were actual laws or strict regulations. It’s a bit complicated. I am not sure if I even understand it completely. But for me, I take it like that.”

You said the decision-making system in Sweden has not been mentioned in the global media. Despite that, Sweden has been criticized a lot. What do you think about that?

“I understand it. A lot of questions they arise are questions we still need to debate. It isn’t weird that there is criticism because there is no agreement within Sweden. Not at all actually. Anders Tegnell, the front person of the public health agency for all official communication regarding Corona, he has been criticized a lot within Sweden. At the moment, I think the majority of Sweden is leaning more towards not liking him. I don’t follow the news that closely anymore because it sometimes becomes too much. Therefore, I don’t have a clear impression of him. But to answer your question, I understand why and in some cases I totally agree.”

In what way do you notice the recommendations in your personal life?

“My dad is a musician and does not have much work now because of the situation. He is teaching, but not doing any gigs. My mum is working from home, which she really likes and is used to. She has been doing her doctor’s thesis, writing it from home for years. I usually sing in a choir, but that is off as well. Concerts are not happening anymore neither.

When it comes to education, exams are a bit different. Overall, I do them from home. My youngest sister’s school cancelled all exams to stop sick people from coming in. They were noticing that children who had been sick at home were coming in to do the exams. The biggest thing that I noticed is that I do not go out or into the city and bars anymore. They are open though with some adjustments, but I am definitely not doing that.”

What have you been doing since you’ve been sitting at home?

“I am writing my bachelor thesis, which is individual work or writing in pairs. I study business and economics and am writing my thesis on how management consultants use trust in IT implementations, basically. That is what I have been doing.”

Are you also spending time with your family now that you are at your parental house?

“Yeah, I started playing the Sims haha. I downloaded a lot of custom content for building historical houses. With the family, we play Mahjong, the Chinese game. Also, we have been watching a lot of things like all the extended versions of Lord of the Rings and Robinson. That is the TV show where they place people on islands and they have to survive. Aside from that, we hike. Both my youngest sister and my dad had their birthdays the past month. For my little sister, we went to the forest with the family, did a hike and grilled some food. For my dad’s birthday, we did some presents and cake, something really small. Normally we would go to a restaurant and go to the movies or a bowling bar. Just doing something special. But now, at home.

Also, my sister and I died our hair pink! You cannot really see it anymore, it faded. We thought, ‘there is no social restriction to dying your hair pink in this kind of situation’ so we did that yesterday. It has been fun. You have to stay entertained somehow. I live with four other people and a dog, so it is not that bad. But if you live alone, like some of my friends, then it gets hard really quickly.”

“That is the hardest question because I don’t really know. Honestly, I am not really bummed out that there will not be many summer jobs this year. I was not planning on working this summer anyway. Maybe I will finally get my driver’s license when all of this is over. I find it hard to plan something because who knows when this pandemic will be over? Obviously, it would be nice to travel again but it isn’t my priority right now. What I will do, depends on where we will be in a few months. All I can say for now is that I will have some champagne with my thesis partner and just be happy that we finished our thesis. That’s my next big plan.”

Through Lovisa’s perspective, we get a view of what it is like to be in Sweden during the pandemic. To broaden that view data of the situation in Sweden has been provided below.