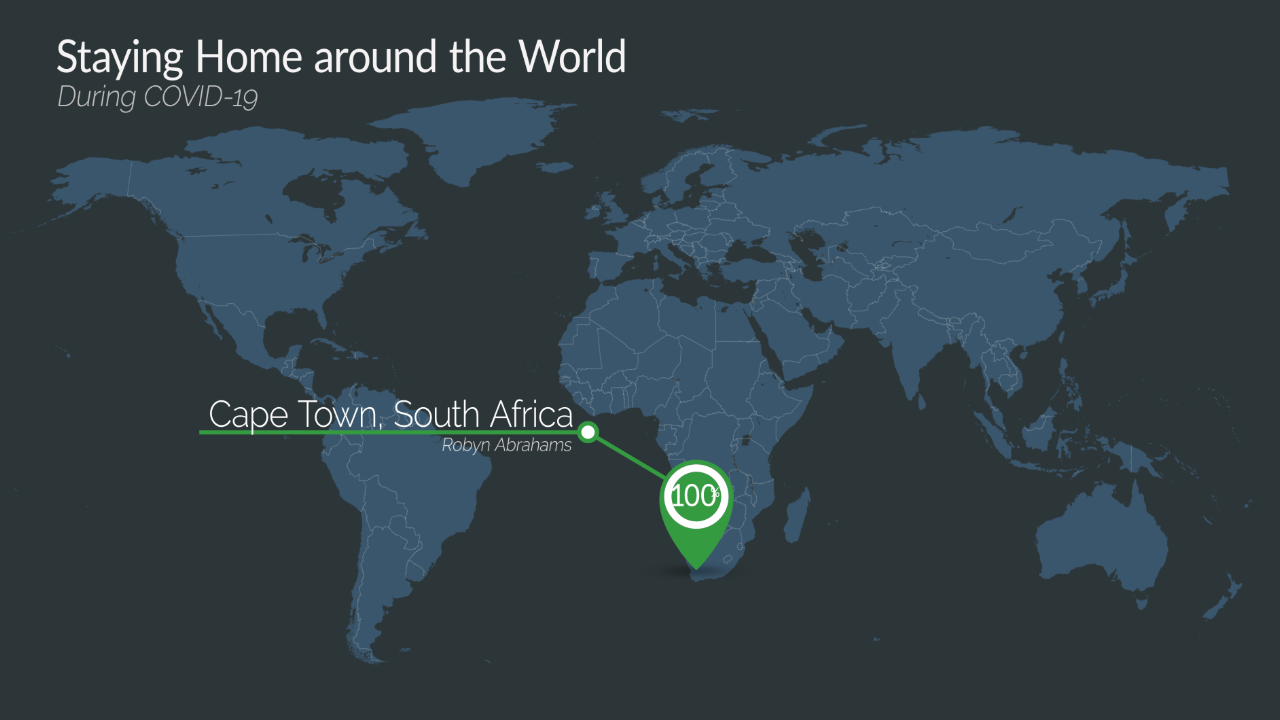 The first cases of Corona appeared in the North of the African continent and slowly made its way to the south. Were you very aware of the spreading of the virus on the continent?

“I don’t know about other countries in Africa, but in South Africa, African news is not published that much. It is seen as not that big of a deal. The first cases were more a faraway kind of thing that was happening. It was only when it started breaking out that people noticed – I am sure some people are living with all the news outlets and knew before – but I only started paying attention when it got to Europe. That was when I thought ‘Holy shit, this is actually a thing.’ I had heard about it when it started in China, but I did not expect it to become this big of a deal.”

When did you realize South Africa was affected by the Coronavirus?

“It was about a few weeks before they announced the quarantine here. There have been two incidences. One with a group of people that had come back from Italy. They came back to the north of South Africa, near the border with Mozambique. And the second incident had been with a cruise ship, I think it was from the Mediterranean. Not sure. But it also came to that side of South Africa. That was when there were actual cases and people started to take precautions, but also not that much. I cannot stress enough how it was considered not a big deal back then. It sounds bad, but people were still making jokes about it at that time. No one was really paying attention to it until it got to Johannesburg. That was when a lot of people started panicking. It was in a matter of a single week, if not three days, that the whole country went from being completely free to completely shut down.”

Where and how did they start locking things down?

“The president had shut down a few of the trading roads first. He closed a couple of the land borders, started controlling the marine borders and he would not allow any international people carriers, such as cruises, back inside the country unless you got in self-quarantine first. Also, at the airports, it got more regulated because of the international people coming in. Then the 15th or 16th of March there was a preconference. None of us was prepared or warned about any regulations. That night the president said: ‘We are going to close down a few businesses, gyms and a few recreational areas.’ All supermarkets and liquor stores etcetera were still open. He then told us that for the primary schools there wouldn’t be any classes starting the next Wednesday. This was about a week before then. High school kids were also told to stay home. All university students were wondering ‘What about us?’. He hadn’t said anything about the universities but then on the next Monday and Tuesday, the universities themselves decided to close down.

It was actually funny because they closed down and then all the students went to the university and ran around together shouting ‘Corona! Corona!’. There was a whole dance, haha. They seemed super excited about the fact that all universities were closed.”

South Africa counts the most confirmed Corona cases on the continent, according to the W.H.O. Do you notice this in your area?

“I live in an area which is pretty okay, in the southern suburbs, but around us are areas with a lot of confirmed cases. There is also a quarantine camp in southern direction from my area. For the rest, if I have to go out for the supermarket, unless I go to the local one, I will see military vehicles, even fucking tanks, military driving around, the police on full patrol. They are arresting people if they don’t have a receipt from the supermarket or pharmacy and they are out on the street. Basically, if you don’t have ‘a purpose’ to be out, they will arrest you.

My friend lives in the north of Cape Town and there the military action is not common. They are more active where there is a lot of gangs because they cannot control those people already. There, they already had a military presence but now it just doubled, tripled even. People are even burning down places and breaking into shops and liquor stores because we can’t buy alcohol or cigarettes nowadays. But not in the north of Cape Town.”

“Well, yes because I do have lower economic class family. They don’t live in shacks, but they have difficulties. For example, when everyone bought supplies in bulk to stock up. Buying hand sanitizer and toilet paper because apparently, that runs out. Which is so weird, because Corona does not give you diarrhoea. Anyway, those who bought the supplies in bulk had money to spend. But the people who only have pension money or the poor had to wait until they got paid by someone else. By the time they did have money, there was nothing in stock. Also, some people could afford to get tested. However, a lot of people do not have medical aid, so they cannot financially afford it to get tested.”

Is it harder for them to follow the government’s guidelines and restrictions?

“Yes, definitely. Have you ever seen a Shanty Town with about ten houses? Millions of people live in these towns. We have one town called Khayelitsha and there is another one called Delft. It is literally kilometres of these kinds of shacks. You live right on top of each other. Inside a house, it’s smaller than you can imagine. About five people are living in there. There is no way you can self-quarantine. The government takes random fields somewhere and makes them into quarantine-zones. Though, people do not want to go there because it’s unsafe. People are getting raped there. For example, there was a girl who went to one of these quarantine-zones a few days ago. The girl was eighteen and a guy raped her there. It’s horrible.”

Is it common for that to happen?

“Yes. Imagine living in a Shanty Town and being told you have symptoms. That you need to leave your family to go to a place where it is unsafe. I don’t think you are going to be saying ‘Wooh, let’s go!’. Most people are going to stay home and infect their families who will infect others who live close by. It’s a domino-effect.”

What is personally your biggest struggle due to the coronavirus?

“The actual isolation. Being away from people because I am very extroverted. I get energy from being around other people. It’s actually bad for my mental health to be isolated like this. Also, I cannot go to my therapist because of the situation. I think mental health and not socializing are the biggest issues for me, personally. It isn’t easy, but it is good. The time is required but we are social creatures. We are not supposed to be away from each other this long.

Can we also say that no one appreciated university enough? And the friends we have because of it. I would give my left hand up just to go back. Maybe even my right.”

What is an opportunity that the pandemic presents to you?

“It has given me a lot of time to reconnect with people I haven’t contacted in a long time because I was too busy with school and work. But also, time to write. I love writing and it is probably something I want to pursue in the future. Though, I have not had the time to actually work on a project. This situation really gives me the opportunity to sit down and actually work on it. I also got back into yoga.”

What are you planning to do after the crisis?

“I started a hiking club back in university. We would go out on a hike every Saturday. Now, I miss the mountains so much. I look at the mountain nearby and it is taunting me. Because from here I can see it and then I just miss it so much. I am already planning a huge hike for when we’re free again or go to the beach because eghh… it’s right there. And then clubbing. Yes.”

Robyn’s story is one of the millions in South Africa. To get a better overview of the presence of the Coronavirus in South Africa we can take a look at the numbers and statistics below.