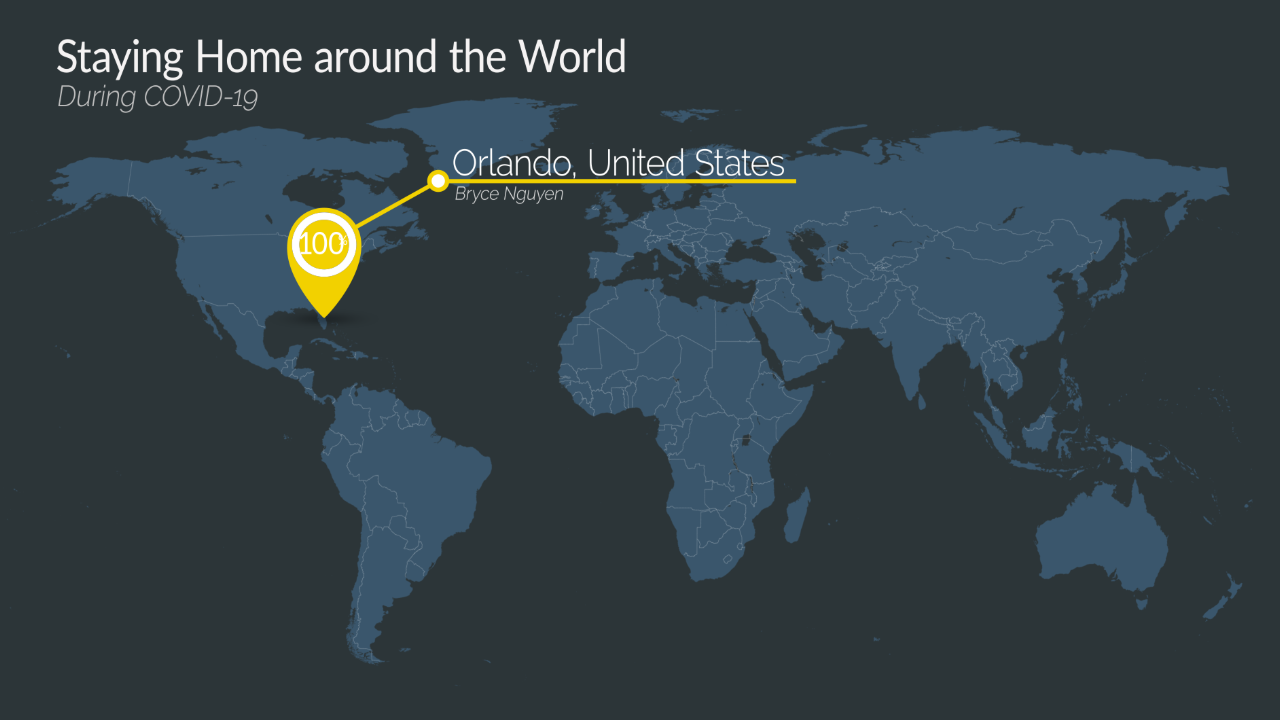 When did you first hear about the Coronavirus?

“The first time I heard about the Coronavirus was the beginning of our spring term (early January). One of my close friends is from Boston but her whole family is from a province in China that is near Wuhan. She went back for winter break with her family but when she came back the situation in China unfolded. She was really worried about her family for the first two weeks of class. Basically, she was trying to figure out what was going on and if they were safe. Of course, I care about her wellbeing and emotional sanity. Every time I would see her I would ask her how her family was doing. But it was also easy for me to not actively think about it when we were not together. Truthfully did not expect it to reach the United States. And if I did, I did not expect it on the scale that it is now.”

At the end of January, the first cases of Corona got confirmed in the US. How did you find out?

“I found out through the news. I worked as a part-timer for NBC News, which is one of the big news organizations in America. I was actually at work at the NBC headquarters in New York when I heard about the Coronavirus coming to the United States because they are always playing the news. I remember I just thought it was unrealistic for the Coronavirus to come to the U.S. and have a huge impact. I do not know why I thought that way.

Eventually, it spread to New York and turned the city into the epicentre. How did you experience that?

“The university to which I go to is in Philadelphia. Every Tuesday I would leave for New York and Wednesday morning I would take the train back to Philadelphia to make it to class on time that morning. This continued on to the middle of March, but before that, I remember thinking I was going to be fine. That there was nothing really in New York yet. I never caught any of the symptoms, but I was there for the majority of the period in which the virus spread through the city.”

Did you see the city change during that time?

“Towards the beginning of March, nothing had changed. From that point, I saw that businesses definitely changed. I remember receiving a ton of emails at the beginning of March. For example, from a business that I had not gone to in a year or two saying, ‘these are the precautions we are taking to ensure the safety of our customers’. That was one of the changes that I noticed. Being in New York and realizing that all these businesses were taking extra precautions to make sure that everything is clean and sanitary, was strange.”

How did the government respond when the first cases were confirmed?

“I would say they were really slow to respond. All we knew about the virus was that it had been in China for months and it had not reached the United States immediately. Therefore, I think, people were unwilling to believe the credibility of the virus. Also, I do not think the public officials were taking it as seriously as they should have. To get tested in the U.S. is either very difficult or very easy. It depends on where you are. I have heard some people got tested just by walking into a health centre but also that some people, who definitely had it, could not get tested. I know there was a significant movement to privatises testings so that certain companies could make a ton of money off of testing people.”

President Trump made it clear he is a proponent of reopening the economy, but some states are strongly against it. How do you view this situation?

“This is where it gets muddy because I do not think that Trump wants to reopen the economy at all. If you look into his smaller conversations and press briefings he is saying that he advises against reopening the economy. He knows that our health care system does not have the capacity to take care of more sick people. For example, when the governor of Georgia reopened stores president Trump was like ‘what are you doing? You need to stop that’. But then he would go on TV, do the large press convergences and say that we should reopen the economy. I think this is because it is an election year. I think that Trump advising to open the economy again is a political move. Making sure that he is not alienating his support base. In general, the people who are protesting to reopen the economy tend to be more right-leaning and they will vote for a Republican in November. If Trump says that he wants the economy to stay closed, it is going to alienate the people who vote for him, normally. That is how I would explain the division.”

So, you think that these statements are popularity-driven moves?

“Yeah because has every power to reopen the economy if he really wanted to. He and his team know that opening up the economy right now will lead to a ton of deaths, which does not look good on his part in an election year. But he also knows that people are unemployed, people are not making money and cannot afford their rent. A lot of different bad things are happening because the economy is closed. His responses, I think, are driven by the fact that it is an election year. When people are going to vote in November, they will remember recent events rather than events that happened in the middle of a term.”

Another thing that stood out was when the virus came to the US a lot of Americans started hoarding weapons. Can you explain this?

“Gun culture in America has really been embedded in our history. I think it was spurred on because there was a specific act enacted by the British over the American colonists to be like taking their firearms away. The American colonists ensured when they were making the Bill of Rights and the constitution, that they included the second amendment, which was “The government cannot take away our firearms”. It was a direct reaction to something that the British released. If that makes sense? This really baked very well into the way Americans understand their relationship with guns. Compared to other countries Americans hoard weapons because it is part of our governmental policies and national innate rights to be able to own a gun and protect ourselves. When they think about protecting their loved ones they will think about guns. People are probably hoarding weapons because they think that if infected people come near them they can just shoot them. I do not understand it, but I understand where it comes from.”

What did your daily life look like before the virus came to the US?

“I am a pretty busy college student. My daily life would include waking up early, going to the gym and then attend class. In between classes I would sit somewhere and do some homework. Towards the evening I was meeting with administrators for some of the clubs I am a part of or have club meetings. Also cooking diner, meeting up with friends and then doing work for NBC. Oh, and I had a job at the gym.”

How did your life change because of the virus?

“January, February and beginning of March you could find me in specific places at specific times during. I am very much a person of routine. When the virus happened, I had to decide if I wanted to stay in Philadelphia or go back to Orlando. Now, I am no longer in Philadelphia, I got fired from both of the jobs basically. The clubs that I am a part of do not meet anymore because we are not on campus. My daily life changed a lot because now I am doing whatever whenever and before I was very well-structured.”

How are you handling that change?

“I think I am someone who keeps busy to not have to stop, relax, reflect and think about my life. Which I think is quite common. The past months I have been having a lot of very introspective conversations with myself. Confronting myself with big questions that I normally don’t want to think about until I have to. Which has been a bit scary and not the best for my mental health. I am constantly grappling with this existential dread of the direction in which my life is moving. I am going into my final year of college and it is a really weird state to be in. Thinking about plans for after college. For the longest time, my ultimate goal has been college. I studied so hard to get into a good college and I did. Now I am like… and now what? For three years I have been avoiding that question. The virus is forcing me to take a second, breathe and really answer that question.”

Would you say this is your personal biggest struggle that comes with the situation?

“Probably not. My mum is considered an essential worker and she is still working. It has been really hard knowing she is being exposed to the virus on a regular basis. It is really scary. She works as a nanny for a couple who works at a hospital. They see a lot of patients daily and come home afterwards. Aside from that, my mom also works as a barista at Starbucks. That just makes me worried. Mainly the uncertainty of her safety makes it stressful.”

Would you say that the crisis also presented an opportunity for you?

“One of the biggest opportunities that this presented me is being able to spend time with my family. I moved out when I went to college to a city that is eighteen hours away from here by car. Because of that I obviously did not go home often. At most, two or three times a year. I have an older sister who I am really close with. She is in medical school, so we really see each other once a year, normally. But then the virus happened, and everyone is home together. It has been nice, I really enjoy that.”

What are you going to do when the pandemic is over?

“Probably visit my friends who are abroad right now. My trip to Berlin and Amsterdam has been cancelled due to Corona. Now, I have the time to recalculate and plan out a better vacation. Maybe a year from now, after graduation, it would be an exciting time to go.”